The master of his domain and the director of our nostalgic imagination. Eric Cantona stars, in his own life, as ‘The King’…

Marlon Brando was a tricky customer. It was notoriously difficult to secure an interview with the superstar so it was a real coup when Dick Cavett managed it in 1973.

Cavett, one of America’s top television presenters, was nearly sick with nerves introducing Hollywood’s pioneering hellraiser. We know this because he told the world, right there.

Brando then entered, present to bask in the glory of his recently-received Academy Award courtesy of an iconic turn in The Godfather.

Despite Cavett’s best efforts, Brando did not talk about the film. Either bored or disdainful, he barely discussed the entertainment industry at all.

Watching it reminded me of Eric Cantona, a man my peers and I growing up in the 1990s idolised as a mythical and enigmatic character, long before any of us knew what either of those nice words meant.

It was an unspoken communal feeling. 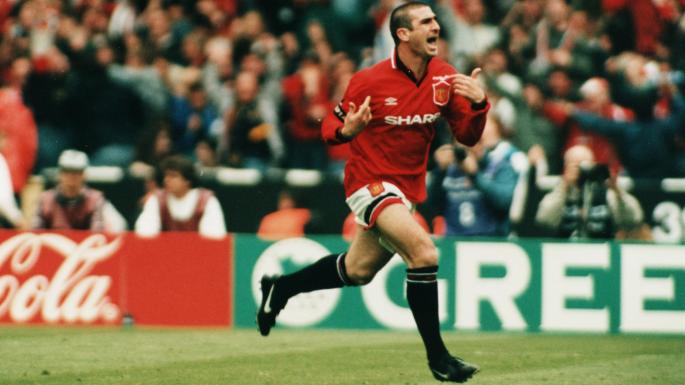 Image via The Times

Brando talked about social injustices during the lengthy interview with Cavett. He anguished over the plight of the American Indian and provided commentary on the daily pretence in which everyone, everywhere, lives their lives in order to simply survive in this world.

The actor did not feel the need nor desire to chinwag about his inimitable work. The audience could not get enough of the utterly engrossing conversation.

A nomadic and unsettled talent in France and a cheeky First Division champion with Leeds, Cantona was peerless in the Premier League at his peak. You know what he did; spearheading Manchester United to their first title in 26 years, adding three more championships in the next four seasons, including a couple of league and cup doubles, and firmly solidifying Alex Ferguson’s side – who were previously going nowhere – back to the summit of the British game.

If you by chance were not aware of this before reading Cantona’s recent entry into the increasingly popular Players’ Tribune series, you would have come out the other side none the wiser. Footballers who have participated in these pieces, like Raheem Sterling and Romelu Lukaku, talk about their childhood struggles growing up and how they got their big break.

Cantona barely mentions the latter, hardly even hinting at his status as Manchester United’s best ever, in the eyes of many.

Instead, he discusses how his grandfather, from Barcelona, fought in the Spanish Civil War and escaped capture by General Franco’s Nationalists with only minutes to spare, before fleeing to France. Cantona’s own father spent his formative years living in a cave until the family finished building their house on the hills of Marseille.

These are the events that shaped Cantona as a human being, first and foremost. Even as a youngster, he had priorities beyond the pitch. He has always been more than one of the finest players to ever grace the English game.

And so why did so many readers indulge Cantona in this retrospective article? Because of the way he made us feel, of course.

Collar up. Chest out. Unshakeably self-confident and effortlessly intimidating. Gary Neville described his aura as essentially, well, indescribable. It was how he made us feel.

Us kids would reluctantly pretend to be him when playing our own games. It felt like we were kidding ourselves.

We would freely mimic Roy Keane’s ceaseless energy and copy the goalkeeping showmanship of Peter Schmeichel. We would pretend to dribble like Brazilian Ronaldo and shoot like David Beckham. But, besides the collar placement impression, this man’s prestige was unattainable, almost unrelatable. The delightful chips, the irresistible flicks, the timeless winners.

He seemed superhuman. He was definitely our superhero. 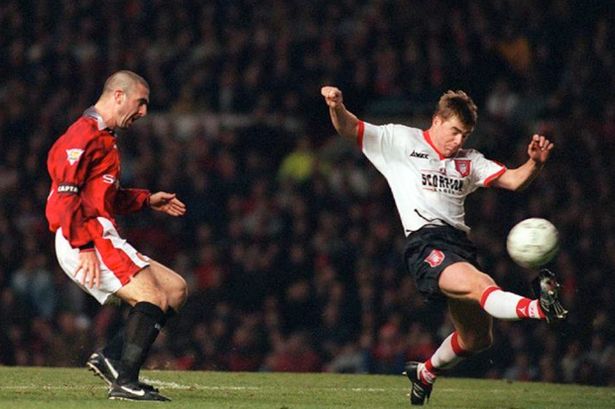 Even the bad times were beautiful.

When the FA kicked Cantona out of football for nine months (overturning and increasing Manchester United’s own in-house suspension set until the end of 1994/95) he went AWOL, determined to leave the game behind, for good.

Ferguson tracked him down in a Parisian restaurant and in true Godfather-esque style that Brando himself would have tipped his cap to, the pair had a clandestine meeting. The result was two more seasons of unrivalled majesty, starting with the Hollywood comeback against Liverpool at Old Trafford.

Cantona saved his Oscar-worthy moment for the final act; exiting stage left, permanently, aged 30 and seemingly on a whim. Privately, the passion had been lost months earlier never to be found again. We now know that, for Cantona, passion is everything and there is nothing without it. He lives on feelings.

In August 1997, Alex Ferguson sent a personal, highly emotive letter to his recently-departed star pupil, lamenting his decision to quit but welcoming a newfound opportunity for the beginning of a wonderful friendship.

It was how he made us all feel.

Perhaps his former colleague Brian McClair, who assisted that iconic Sunderland goal, described the impact of this unique number seven most eloquently when he proclaimed on a Sky Sports documentary about the Frenchman, “It Eric’s stage. Eric’s the lead actor and Eric delivers the best lines.”

That just left the Theatre of Dreams as the perfect venue for ‘The King’.

After Marlon Brando wrapped up that interview with Dick Cavett, they hit the town, en route to a restaurant in Chinatown when they were suddenly accosted by the notorious paparazzo, Ron Galella. Brando socked the intrusive cameraman, breaking his jaw and severely injuring his own hand in the process. He regretted not a bit of it.

When Eric Cantona was tasked with choosing the finest hour from his distinguished career, he answered, “When I did the kung fu kick on the hooligan, because these kind of people don’t have to be at the game. I think maybe it’s like a dream for some, you know sometimes to kick these kind of people.”

Those two would have hit it off; the masters of their craft and the driving forces of their audiences’ imagination.

Listen to our Eric Cantona episode on the Nostalgia Ultras podcast where we chat extensively about his career and what made him the man he is today.

Digital Audience Manager with Off The Ball. Freelance journalist. View all posts by colmdotboohig

This is a text widget. The Text Widget allows you to add text or HTML to your sidebar. You can use a text widget to display text, links, images, HTML, or a combination of these. Edit them in the Widget section of the Customizer.
%d bloggers like this: